From Uncyclopedia, the content-free encyclopedia
(Redirected from Homeless)
Jump to: navigation, search Homelessness was invented in the 1950's by the American Government as a ploy to get more of the taxpayers money without asking for tax. Homeless people may look real but they are actually government robots designed to look pathetic and smell funky. Below are examples of robotic homeless people and their annoying ways.

"This is for food, not for drugs."[edit]

Like most people of the modern world, homeless people ain't got no money. But what separates the homeless from the commoner is the fact that many of these vagrants have no place to live, whereas I live in Connecticut and have a six-bedroom house that's just for me and my cats. But that don't mean I got money. I haven't paid my taxes in four years and they came and took my car away this afternoon. I'm broke!

The homeless are much like the zombies on Walking Dead, only more convincing as they aren't all clean shaven with well groomed fingernails.

When I see homeless people on the street, I just want to run them over, spit on them and kick them in the face. Mommy says they're like bears and you can't ever feed them or else they'll start going through your trash looking for more. I hate homeless people, we should build a giant wall to keep all the homeless people away from our homes, with a roof over it too in case they try and climb up it and a floor should they try and tunnel under. Maybe add a moat with crocodiles, even electrify the walls like an electric fence. Then we could order them to do stuff for us all day. That would show em who's boss alright!

"Is it just me or does he smell like pee?"[edit] 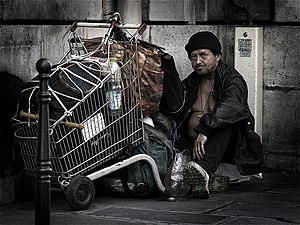 Most homeless people live on the streets. You can often find them selling themselves to passersby, turning tricks in order to score more cash for their addictions to aluminum. Aluminum is a valuable drug and many homeless people get into fights over scoring the pure stuff. It can be quite costly, some homeless dive meters down into the depths of dumpsters to bring back lost sunken treasure to the surface, but the payoff is sweet even if the smell is quite foul. Most have a strong reaction to the the metal simply by placing it on their foreheads to keep the government mind control satellite from making them do things, while others can make 5 cents in California, 10 cents in Maine, or a shiny surface for freebasing crack. Some homeless people have a pretty good home.

Programs to help the homeless have popped up all over America. In Florida, for instance, a new welfare-based initiative called stand your ground has been enacted whereby passersby can shoot the homeless on sight at night, for crossing their path and looking like they might be carrying a knife as one of their last remaining possessions, causing the bums to run/keeping them moving and thus helping them to stay warm.

Because of these annoying issues and the Trojan Worm Virus, the government in New Orleans, the Louisiana government, along with FEMA, helped to start Operation Clean Sweep, or "Whitewash" for short. The idea behind OCS was to help rid the streets of "homeless people" by washing them away and down the drain, much like a giant toilet. Overzealousness led to rampant improvements in the city, many noting that not only were there no "homeless people" on the streets, but the people they are related to have seemingly disappeared as well. However the government is currently thinking up new ways to subliminally collect extra money.

It is believed that the homeless take change and convert it into electrical energy to power their mechanical processes. If they should have no change come sunrise, than they will turn to stone and become living statues until someone releases the witch's curse by throwing pennies at them and making a wish. Alternatively you can break the spell with true love's first kiss; but dating a homeless person can often end up having more guilt attached to the relationship than even a one night stand with a nun.

While the change they receive is necessary for their vital body functions, homeless people still require nourishment from other sources. The most popular source of nourishment in the homeless community is "Cracknip". "Cracknip" is a luxurious dish that is composed of Crack, Catnip, and Vodka. This impeccable combination of ingredients provides the perfect source of energy for anyone who lives in a box located in a small, dark, damp, cold alley. A homeless person on cracknip.

Unlike pet house pets, who receive close to eight hundred and fifteen million dollars a year just in Valentines gifts from their owners, the homeless are largely regarded as an unwanted burden to the advancement of the human race, to be swept off the streets with the rest of the garbage and be buried in a landfill. [Citation not needed at all; thank you very much]

Although they may not look it, homeless people are a very important part of our American society, much like mosquitos are to the ecosystem. Without homeless people, many children would be left without a costume idea on Halloween and large pharmaceutical companies would have no one to test their new medicine on. Also, there would be no one to sit on the sidewalk and beg people for change or die of heroin overdoses. Homeless people are also an extremely important part of the environment and ecosystem. When a homeless person dies, his or her nutrients are released back into the soil...or the sidewalk or cop car, depending. Without homeless people, there would be no one to scare children into not running away from home. We need them like they need a nice, long shower, clean underwear, and a new wristwatch to hide the needle track marks and to pawn for more meth. We must respect the homeless, as according to Sellout Jesus soon they will inherit the earth, and it's still easier for them to become constructive members of society than for a rich man to enter the gated community of heaven or for a camel to pass through the eye of a dirty needle.

Look up Homelessness in Undictionary, the twisted dictionary
Retrieved from "https://uncyclopedia.ca/w/index.php?title=Homelessness&oldid=6027833"
Categories: